I began this post about six days ago, and am just now getting around to putting it online. Oops…

The past week has been full of very fun moments, which won’t be ending any time soon!

Our birthdays are five days apart, with Landon’s being on the 13th and mine coming up tomorrow, the 18th. So we have typically done things together, to celebrate both, and this year is no exception. On Tuesday we headed to Granada (where we went to language school) to stay the night and just relax. We hadn’t had time to go back to Granada since we left at the beginning of May, and we were excited to go visit the colonial town. (We also were generously gifted a one night stay at a nice hotel there, so that helped make the decision.) 🙂

We began Tuesday slowly, with a stop to get awesome coffee and a ‘birthday chocolate chip muffin,’ after which we made the hour or so drive to Granada. It was a sort of surreal experience to be going back there and it not being where we live. But that was also part of the fun. Sometimes traveling here can be a little stressful because we aren’t sure exactly where to park, where to eat, where to walk, etc. All those little unknowns add up to a lot of added stress, so to go back to a place we knew was very nice. 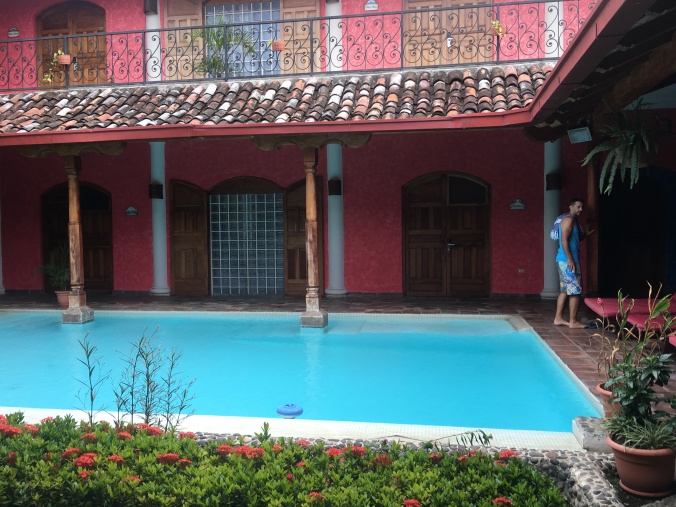 We were able to check into our hotel early, which was awesome, so after parking the truck we stopped into a little restaurant for a light lunch. We had never eaten at the restaurant before, but when the menu said it was mediterranean, and they had dolmas, we were in. At one point I even told Landon, “I feel like we are in Lebanon, not Nicaragua.” A tour guide guy had spoken to us on the street before we had parked our truck and told us he could take us on a tour of the islands in Lake Nicaragua. It was something we hadn’t done before, and even though I’m always somewhat apprehensive about those sorts of ‘deals’, Landon was up for it so we went for it.

All the boats at the dock. 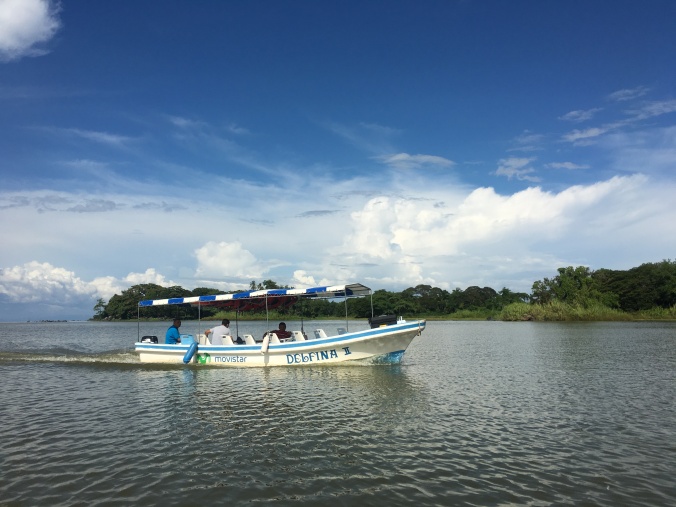 We toured in a boat just like this one.

The edge of the lake is somewhat polluted, but as you get further out into the lake the water is free of debris and garbage. And really, very beautiful. From the lake you can see the volcanoes, the churches of Granada, and the tiny islands. Some have houses on them (second and third homes) but one has monkeys. The entire island is no bigger than a two bedroom house, and is home to five spider monkeys, and some random white-faced monkeys.

One of the locals.

After the boat tour we realized we wanted to just rest. So we did. We went swimming, had dinner at the restaurant connected to the hotel (during which the power went out) and just talked. We both felt like walking around Granada was going to be more stress than we wanted, so we just stayed in. And it was glorious.

Praying the power would come back on, but also enjoying the candlelit dinner.

The next morning we had a delicious breakfast at the hotel, lounged around until it was time to check out, and then headed home. I realized on the way back to Managua that I missed our ‘home’, which was a very nice realization. After the last five months of running around, moving multiple times and considerable stress, it was a very pleasant moment when I realized that I have a place in Nicaragua that feels like home.