This week has been fairly relaxed as we are winding down the crazy busy summer season, and we needed to catch up on a few things. It is amazing how quickly twelve-hour days displace things you have to get done (like buy groceries), so we were grateful to have a slower start to this week.

I wanted to share about a random ‘daily life’ thing. I am hoping to explain more about what living in Nicaragua is like, as many people asked about that before we moved, but now I feel like I have something to say about the topic!

A lot of the time we buy groceries at the local grocery store. We have two that are close, La Colonia and La Union. They are very similar, with the biggest difference (I see) being that La Union is owned by Wal-Mart, so sometimes you can buy random products there that you would also find in the States. We also have a Costco type store here (called PriceSmart), which is awesome for things like toilet paper, big grocery runs, and when teams are here and need a lot of chips/hot dogs/soda for a beach excursion. Recently, though, we have been getting our fruit at a stand near a major roundabout, from a man named Omar.

If you look close, you can see Omar’s head behind the watermelon.

It is really, very convenient. We go around the roundabout, pull over on the side of the road by the stand, roll down the window, and chat with Omar about what he has available. He usually begins the interaction with giving us something for free (it’s been mangoes the past two times because we wanted to buy some, so he showed us they were good), and then we talk about what else he has. He’s a great salesman, and usually gets me to buy a few things I wasn’t originally looking for, but when the fruit man says the avocados are good today, what are you going to do? Certainly not argue. So we pick out the fruit we want, he hands it through the car window as we go along, and then at the end he quickly adds up in his head what our total is. Could he be charging us extra? Sure. Is his knife that he cuts the mangoes open with clean? I have no idea. But, we are growing to love these short interactions, and our smoothies are pretty delicious these days! 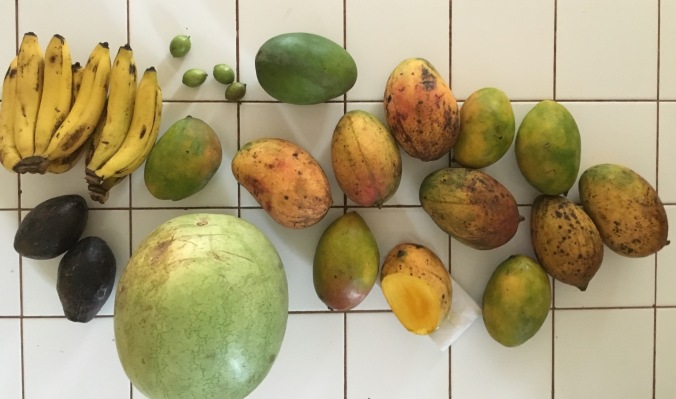 Today’s purchase, not including a mango we already ate and one we gave away. Total cost: $14.50

We’re feeling it. Not being able to hug family and friends. Walking on the other side of the street as people. All of it. . . But we are overwhelmingly grateful for wide open outdoor space to explore. Millions of people are not so lucky, and that is going to make a big difference right now. . . We are praying for miracles and washing our hands. Both. A lot.
Uncategorized
%d bloggers like this: